Scala and the Nature Reserve of Valle Delle Ferriere

A stunning day’s walking. Huge variety of terrain and ...

Much of the walk between Scala and Amalfi passes through Ferriere Nature Reserve. Ferriere translates as ironworks, so as you brush through waist-high ferns, skip over streams on stepping stones and admire views to Amalfi, consider the old iron-workers whose footprints you walk in.
Matig
Afstand 10,5 km
Duur6:00 u
Stijgen767 m
Afdalen1.136 m
Hoogste punt651 m
Laagste punt23 m

Today’s walk proves Amalfi isn’t only about the coast; soon after leaving Minuta, a small village 1 kilometre after Scala, you will enter the Ferriere Nature Reserve. The Italian word ‘Ferriere’ translates to ‘ironworks’, which was once a burgeoning industry here, utilising the many streams to power their factories, and the port in Amalfi to transport their produce. This industry collapsed during the 18th century, and has now been reclaimed by nature and returned to its original state, though if you look carefully you might see overgrown stone bridges and houses dating to this period.

The same streams that once powered the ironworks now impress those who wander through this primitive woodland. From the path you will skip across several streams on stepping stones and admire waterfalls as the stream plummets over the rock, but to see the most impressive waterfall requires a short (200 metre) detour after 4.9 kilometres.

Along the way, you might experience a 'traffic jam', caught in the chaos of goats being herded - it is likely these goats produce the delightful cheese (formaggio) found in this region. Alternatively, you might pass mules and donkeys, which remain the easiest and quickest, if somewhat archaic, way to navigate these paths. At the foot of the limestone cliffs, crane your neck skywards for the chance to see daredevil climbers clinging to the crag, and edging their way to the top.

In Pogerola the first restaurant you will come to, passing its unassuming door after 8.2 kilometres is Sorelle Rispoli. Run by 3 elderly women, it prides itself on serving honest ‘Mama’s Food’. Eating there is an intimate experience as it feels like you are eating in their own house. The food isn’t fancy, but it is traditional, with decent portion-sizes for the hungry hiker and decent prices.

Much of the path is on rocky steps, which can be irregularly spaced. Bear in mind these may be slippery when wet, place your feet with care, and use the handrail where one is provided.

You must cross several streams today. Take the time to choose the best route across, and then walk carefully, bearing in mind rocks may be slippery when wet.

There are few opportunities throughout this walk to buy food or drink, so be sure to bring enough provisions with you.

There are restaurants in Scala where you begin the hike, and Minuta after 1 kilometre. After Minuta, there is nowhere to buy food until you arrive in Pogerola after 8 kilometres.

There are opportunities to refill you water bottle at fountains/taps after 1.8 and 8.1 kilometres.

0.00km – Your bus will drop you in Scala at the Cathedrale Di San Lorenzo. Before you begin, it is worth going in to have a look around; the painting on the ceiling is magnificent. Then, facing the cathedral entrance from outside, TURN RIGHT to walk along the cobbled road, to pass a water fountain on your left, and a pharmacy and post office on your right. Remain on this road for 1 kilometre, ignoring several sets of steps on your left and right.

0.32km – CONTINUE STRAIGHT ON, ignoring the road on your left bearing downhill.

1.0km – 200 metres after entering Minuta, the road will make a sharp right bend. BEAR LEFT to leave the road and down a set of steps, following a sign for Valle delle Ferriere and chiesa SS. Annunziata. After 10 metres, at the bottom of the first set of steps and in front of house number 1, TURN RIGHT to head up the long flight of steps, passing a bus shelter on your right. Remain on these steps, ignoring several minor paths and steps on either side.

1.30km – When you reach a crossroads in the path besides a street-light, where a wide, flat path intersects the steps, TURN LEFT to walk along the paved path. You will have distant views to the sea on your left.

1.80km – CONTINUE STRAIGHT ON as the path enters a wooded section. There is a tap where you can refill your bottles, and then after 50 metres BEAR LEFT, ignoring the steps on your right that climb to a small, stone building. After 200 metres the path will pass through a tunnel bore into the mountain.

2.20km – Shortly after passing the tunnel, BEAR LEFT as the path forks, to stick to the main path and ignore the steps on your right that head up to the metal cylinder.

2.60km – Shortly after a section that hugs the cliff-face closely, a wire fence will appear on your left, and the path will fork. BEAR RIGHT on the path that heads uphill. The left fork has a sign that says ‘Accesso Non Consentito Senza Autorizzazione’, which means ‘Access forbidden without authorisation.’ This path continues for 2.3 kilometres providing spectacular views to Amalfi, before entering a pleasant wooded section.

4.90km – As the path splits and gets slightly confusing beside a stream, TURN LEFT to cross over the stream. There are a few stepping stones and sections of wood to assist you, though bear in mind the rocks may be slippery when wet, and the wood may be unstable. Once over the stream BEAR LEFT to walk along the mud path with the cascading stream on your left. Before you cross the stream, if you have the energy, it is worthwhile continuing ahead for 200 metres of uphill to visit another two waterfalls, the second waterfall being particularly impressive.

5.50km – BEAR LEFT to cross the stream using the stepping stones. The path that bears right continues ahead to view another waterfall. Once across the stream there is a short rocky section, where you might need to use your hands to assist you. Shortly after this rocky section, the path forks around a tree; BEAR RIGHT to head uphill on the path with lots of exposed tree roots. The left fork may have branches across the floor to stop you mistakenly turning left. Some rocks have dots of paint to guide you on the correct path.

6.00km – As you reach a stream on your left, CONTINUE STRAIGHT ON up a slight rise, and then after 20 metres BEAR LEFT to cross the stream at the stepping stones with the waterfall immediately on your right. 20 metres after passing the waterfall BEAR RIGHT as the path forks. There are lots of painted rocks to guide you through this section.

6.40km – At the junction, CONTINUE STRAIGHT ON, ignoring the sharp left turn with the sign to Valle Reserva Ferriere, and then after 10 metres BEAR LEFT as the path forks, ignoring the steps on your right. This path will begin to head downhill, and a wire fence will appear on your left, with some of the wooden fenceposts having dots of paint on.

7.20km – BEAR LEFT to make a sharp turn to cross over the stream. The path has some wooden barriers to prevent it collapsing. After 50 metres you will pass a wooden bench and a squat building. Stick to this well-established path, ignoring vague paths on either side.

7.60km – At the wooden information board CONTINUE STRAIGHT ON the established path with a wooden handrail, ignoring the vague trail headed downhill on your left.

7.90km – As you begin to pass houses on the edge of Pogerola, CONTINUE STRAIGHT ON along the wide path made from stone slabs, ignoring narrow steps and paths to either side. After 200 metres you will pass a water-tap where you can fill your bottle.

8.20km – CONTINUE STRAIGHT ON, ignoring a set of steps heading downhill on your left, immediately followed by a set heading uphill on your right. By now you should be able to see the church and its belltower ahead.

8.30km – BEAR LEFT as the path forks, ignoring the steps on your right. You are still heading in the direction of the church. Just before reaching the church, and entering the open square, TURN LEFT to head down a set of steps, and pass under the terrace of a pub. There is a sign here - though you might need to look over your left shoulder to see it – for Per Amalfi, Via Nuova. These are the first of some several hundred steps that will wind down to Amalfi. Remain on these steps ignoring all side paths for 1.6 kilometres until you reach the road. Ensure you look up to enjoy some special views over Amalfi, particularly in the lower half once you leave the woods.

9.90km – 50 metres after joining the road, TURN LEFT to head down a set of steps with the road on your right. After 100 metres, at the bottom of the steps, CONTINUE STRAIGHT ON along the road.

10.00km – At the 'stop' junction TURN RIGHT sharply, to walk along the road. After 100 metres it will pass under a block of houses. Remain on this road as it heads into the centre of Amalfi.

10.50km - Finish in the bustling piazza at the base of the steps to Amalfi Cathedral, 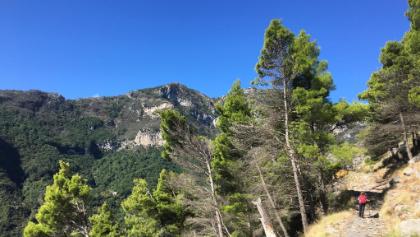