Probably a 4-star rating on a clear day but it was ...
Voir les contributions

A steep ascent out of Zinal through farmland brings you high above the valley floor. Look behind you for views of the 4,000m peaks, including the Matterhorn on a clear day. There is also a chance to see marmots and ibex on the mountainsides.

Hotel Weisshorn is a mountain hotel with an interesting history. Once the favoured stomping ground of late 19th century adventurers, enjoy the camaraderie and atmosphere while you tuck into the delicious house speciality- ‘tarte aux myrtilles, or Myrtleberry Pie.

Keep an eye out for the Ibex, eagles and the Marmot, maybe take binoculars if you have them.
Difficulté
moyen
Technicité
Condition physique
Expérience
Paysage
Point le plus élevé
2429 m
Point le plus bas
1674 m

The weather can change rapidly in the Alps, always check the forecast before you start the days hiking and pack appropriately. If the weather is too rough, do not begin the trek.

There can be left over snow drifts early in the season, the can sometimes have melted underneath - particularly if it covers moving water. Just because it looks solid, it doesn't mean it is. Exercise extreme caution when crossing such snow drifts and if possible walk around them to where you can see the solidity of the ground clearly.

Some of the ground can be uneven, with rocky/pebbly paths and even ice. Ensure you have suitable footwear with ankle support, and step cautiously when needed.

Much of the path is on clifftops and there has been some erosion, for this reason, the path is sometimes unclear, be careful of the drop and of loose rocks and edges to the cliffs.

Some of the gates are cattle deterrents and are electrified, be sure to use the plastic handles and reattach the cable to the housing when you pass through, they are 12 volts, so not dangerous but very unpleasant.

There are not stops make sure to bring a packed lunch and water.

View of the Matterhorn

A monolithic symmetrical triangle of rock that straddles Italy and Switzerland. An iconic and challenging climb even by the standards of mountaineering. You can see it to your left from 6 kilometres onwards (if the day is clear).

Francesco Mosoni was born in 1845  in Domodossola, from an Italian father and a mother from Valais. He practised a commercial activity in Zermatt and later in Sierre. With his brother Pierre, away from any civilization at 2337m of altitude, north of Nava, they built on the site called ”Teta Fayaz ” a hotel on a promontory from where the views are spectacular. The location selection was said to be influenced by Pierre Pont, the owner of the Bella Tola hotel in St. Luc, to avoid competition. Initially, it was a building whose ground floor was made of stone and the first floor of wood.

This tour is available on the following itineraries: WSWITVD

0.00 km - Start with your back to the Hotel Pointe de Zinal (back entrance) and TURN LEFT, following the road as it hairpins up the side of the valley

0.58 km - When you pass the big block of wooden flats on the left, TURN LEFT up a small track that then turns into a grass path that ascends steeply as you BEAR RIGHT looking for the red and white marker

1.40 km - The path forks, BEAR LEFT slightly at the red and white marker

1.90 km - At the fork, by the farmer's house, take the left-hand fork as you BEAR LEFT past the watering trough for the livestock, signed for the Hotel Weisshorn

2.80 km - You emerge from the woods, continue STRAIGHT ON, Hotel Weisshorn signposted

6.90 km - the path forks, the higher path is signed for Gruben, ignore this and BEAR LEFT on the lower path

8.00 km - At the crossroads, continue STRAIGHT ON signed for the hotel, 50 minutes

8.60 km - BEAR LEFT to merge with the track for 40 metres then BEAR RIGHT to join a smaller ascending trail

11.70 km - You have reached Hotel Weisshorn, the day is finished.

As well as the appropriate shoes and layered clothing for the changeable weather and other essentials, you should consider walking poles, UV sunglasses and at least factor 30 suncream. The sun is bright and high UV in the higher Alps and the snow can reflect it and intensify the exposure.

31.08.2018 · Community
Probably a 4-star rating on a clear day but it was foggy/cloudy the day I hiked so there were limited views.
Afficher plus Afficher moins
Trail view
Photo: Phyllis Grove, Community
Commenter 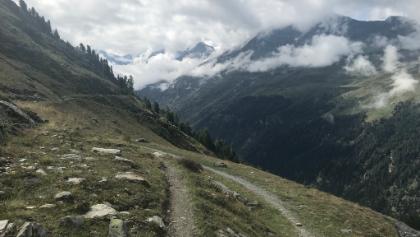