That was longer than advertised - around 15 miles.

A long clifftop walk that follows the coastline from Greve de Lecq to Bouley Bay, passing the Devils Hole and St Johns.
Moyen
Distance 15,7 km
Durée5:00 h.
Dénivelé positif362 m
Dénivelé négatif363 m
This walk is a clifftop classic. Following the coastline, the path is always close to the sea as you cross sparsely covered heathland scattered with heather and wildflowers. The path has many wooden benches on it, looking out to sea or across the bays, the views are constant. The cliffs are granite, and the sound of waves crashing on rock will be your background music. You have the option of leaving the path to take a look at the Devils Hole. a collapsed cave where the sea rushes in. The route is up and down as you drop to sea level before rising back up again to crest the cliffs, for that reason it is the toughest day in Jersey, but the north coast is also the most dramatic and rugged part of the island. You will finish in Bouley Bay, a small village in a deep and narrow valley.

There is some clifftop walking, be very careful of loose rocks and do not go to close to the edge. When you do drop down to the beach, be aware of the tides.

There are some road crossings, always be aware of traffic and be sure to use a pavement/sidewalk where possible, where it isn’t walk on the right-hand side of the road.

Some of the ground can be uneven, with steep descents and muddy/boggy ground. Ensure you have suitable footwear and step cautiously where needed, the mud is especially tricky in wet weather.

The Devils Hole pub does good food, it makes a convenient stop off after the Devils Hole geological feature, otherwise, you can pick up lunch from the hotel. There is nowhere for food in Bouley Bay.

The Devil’s Hole is a natural crater in the solid cliff measuring about 100ft across and plunging 200ft down. It has been caused by the sea gradually eroding the roof of what was once a cave, until it collapsed and formed a crater.

The name ‘Devil’s Hole’ is a dramatic one but was only invented in the 19th century. Formerly it was called ‘Le Creux de Vis’ or Spiral Cave. One possible derivation for its modern name is connected with the shipwreck of a French boat in 1851. Its figurehead was thrust by the tide straight into the hole and a local sculptor transformed the torso into a wooden devil, complete with horns. Today this devil’s metal replica stands in a pool on the way down to the crater, lending a peculiarly supernatural atmosphere to the winding path down to the Devil’s Hole itself.

The Ecrehous is a small group of islands and rocks situated 6 miles from Jersey (8 miles from France). Although close to France the islands are part of Jersey. On a typical trip passengers will cruise around the reef spotting the birdlife, seals and if you are lucky, dolphins. On the high tide, the old fishermen's huts feel isolated and vulnerable to the sea, whilst on the low tide, the landscape changes to become moonlike and reveals sandbanks and rock pools to explore. The area is perfect for paddle-boarding, swimming and picnics.

The bay is in some ways the ideal spot for a harbour. There is safe, deep anchorage with at least six fathoms of water close to the shore. It was already called a port in the Extente of 1274. It was called Portus de Boley, the Port of Bouley. Dumaresq wrote in 1685: "Here has been a design to build a mole, which might be made to secure great ships from all winds or weathers, the materials being at hand." But the steepness of the hills would have made it difficult to transport the cargoes, nor could a town of any size have been built on them.

0.00 km - With your back to the beach and the Prince of Wales hotel, BEAR LEFT on the main road, and then TURN LEFT sharply ascending up a small road signed for the Devils Hole

1.30 km - TURN LEFT down a small road signed Coastal Path, Devils Hole' and keep following the wooden signs that say 'Footpath' for the remainder of the day with the sea to your left

4.00 km - The path turns to a road then BEAR LEFT back onto the path and into the Devils Hole Inn pub carpark (from here you can visit the Devils Hole), TURN LEFT at the other side of the carpark down a narrow road and then after 30 metres TURN LEFT again onto a signposted footpath

4.60 km - Walk down the path until you reach a stone way marker, TURN RIGHT to join the cliff path

5.00 km - At the  stream crossing head STRAIGHT ON up the steps

6.10 km - TURN RIGHT through the carpark and onto the road, then at the T Junction TURN LEFT

8.00 km - Rejoin the road for 50 metres then TURN LEFT descending back on the track and then BEAR RIGHT as the track turns to a path and you are back on the clifftop path

10.20 km - Take a sharp left as you TURN LEFT descending down a small lane through houses

14.80 km - TURN LEFT at the path T Junction onto a descending track

15.40 km - Finish your day at the Water Edge Hotel on the harbourside.

Sturdy waterproof boots as the path can be slippery and wet in parts.

Walking poles for stream crossing and muddy descents if the weather is wet. 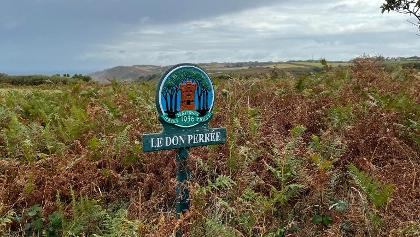