Make sure you visit Villa Cimbrone!
All reviews

This walk feels a little like one long, continuous staircase as you lose all your height and descend from Ravello to Amalfi.

As you descend on the stone steps from Ravello to Amalfi, consider what it would be like to live here – great fitness would be required to get anywhere! Lemon groves cascade down to the sea beside you, while secluded beaches of clear water tempt you to get there faster.

It is easy to be confounded by the labyrinthine network of alleys and streets that comprise Atrani. Often it appears a dead-end but then bends to find a way through, which sometimes means heading directly through the middle or under a building, via a covered alleyway. Even with these route notes, getting lost is likely – but then again, that is half the fun! Thankfully it is easy to find your way back on track, by walking generally parallel to the sea, keeping it on your left.

Home-made gelato ice cream is a great way to conclude any hike; thankfully Amalfi has an abundance of stores where this can be arranged! Why not go for a lemon flavour?

Much of the path is on rocky steps, which are often irregularly spaced. Bear in mind these may be slippery when wet, place your feet with care, and use the handrail where one is provided.

You will pass through Atrani after 2.2 kilometres which offers various places to stop and buy food.

Amalfi has a large variety of restaurants and cafes.

There is a tap to fill your water bottles after 1.9 kilometres.

0.00km – Start in the Piazzo Duomo in Ravello. Facing the church, TURN RIGHT to walk along the narrow street and past the old stone tower on your left. Ignore the large tunnel on your left. After 75 metres CONTINUE STRAIGHT ON through the low, covered alleyway and then immediately BEAR RIGHT up the stone steps, passing Hotel Rufolo on your left.

0.23km – CONTINUE STRAIGHT ON through a covered alley, with the entrance to the church and an impressive art gallery on your left. The church is free to enter and impressive fresco paintings adorn the walls.

0.40km – BEAR LEFT towards Villa Cimbrone, ignoring the right fork onto Villa Trinita. After 100 metres head down stone steps on your right and past the monastero (monastery) on your left.

0.59km – Just before passing the arch with Villa CImbrone written on it, TURN RIGHT down the narrow stony steps onto Villa Santa Barbara, following the signs to Amalfi and Minori. Look over your right shoulder to see caves in the limestone cliff, and houses built into these caves. After 100 metres, TURN LEFT sharply to continue heading downhill on the steps, heading towards Amalfi and Minori.

1.20km – With a cliff high above you on your left, TURN RIGHT sharply to head downhill on the stone steps, following the sign to Amalfi, but ignoring the path which slopes ahead towards Minori. These steps are steep and irregularly-spaced; be careful and use the metal handrail where provided.

1.70km – Upon reaching the road CONTINUE STRAIGHT ON to cross the road and continue down the steps on the far side, following the sign to Amalfi, Atrani and Via Castiglione. Be careful crossing this road as it is on a blind bend; we recommend to walk 5 metres to your left so that you can see more clearly whether any cars are coming.

1.80km – Ignore the sharp left turn. CONTINUE STRAIGHT ON heading downhill towards the sea. After 20 metres TURN RIGHT at the T-junction with houses 9 and 11 directly ahead. After 20 metres BEAR RIGHT as the path forks beside a water-tap, ignoring the left turn signposted to Castiglione.

2.10km – As the path forks, BEAR LEFT to head downhill on the steps towards a fresco painting of Jesus and the Virgin Mary. Once through the covered alleyway, after 20 metres, TURN LEFT, following the green arrow for ‘Escape Route’ and headed towards the church. Then, with the church directly ahead, and before entering the courtyard TURN RIGHT to head down the steps.

2.20km – At the junction in front of house number 1, TURN LEFT. After 10 metres TURN RIGHT to head downhill on the wide set of steps, and then immediately BEAR RIGHT, ignoring the set of steps heading down to the road. You will enter a piazza.

2.20km – CONTINUE STRAIGHT ON across the piazza, ignoring the two tunnels to the beach on your left, and passing just to the right of a red post-box and then through a narrow alley called Via Campo, and signposted to Amalfi. This alleyway is directly opposite the point where you enter the Piazza.

2.30km – BEAR RIGHT as the steps fork around house number 19. You will soon pass a hotel on your right and then continue up a steep set of steps, following signs for Amalfi, Sanctuario, S. Maria and Del Bando. At the top of these steep steps ignore Via Piedmont on your right.

2.50km – Just before passing house number 9, TURN RIGHT up the steps which are covered by a building. At the top of the steps TURN LEFT following the sign to Amalfi, and ignoring the right turn to Amalfi and Sanctuario. You are now walking along Via Torricella, which will become easier to navigate, with the sea on your left - Phew! Just be glad you're not the postman! Ignore several sets of steps on your right.

2.90km – After descending a set of steps and with house number 3 on your left, ignore the sharp left turn down further steps and CONTINUE STRAIGHT ON along an alleyway under a building. Ignore several sets of steps on your right.

2.80km – After the steps wind their way down to the road, TURN RIGHT to walk alongside the road and back to Amalfi. 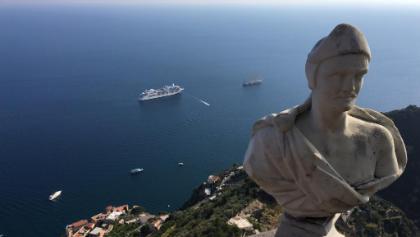