Quite interesting to see the old mine works throughout this ...

This higher route between Keld and Reeth is a unique walk which most hikers choose not because it is more beautiful than the low route (though it does provide splendid views), but because it navigates between long-gone lead mines and infrastructure that shaped the Swaledale we see today. Lead mining peaked in this area during the 18th and 19th century, and the paths which today bustle with walkers would once have been frequented by miners.

Along the way, you will discover rusting machinery, many derelict buildings which would once have been peat stores, smelting mills and miners’ houses. Mounds of excavated rubble and scree transform the tops of the moors into a lunar landscape making for a bizarre walking experience.

Reeth is known as the ‘Capital of Swaledale’ and is the biggest settlement in the area, yet still maintains that charming ‘small-village’ feel, centred around a village green and surrounded on all sides by rolling hills, fragmented into a patchwork of fields by drywalls.

There are a few stretches where you must walk on the road as there is no pavement or verge. Walk on the right side facing the oncoming traffic unless there is a right-hand turn, in which case you should cross to the outside edge to allow drivers the maximum chance to see you.

There are several river crossings in today’s walk. There are always stepping stones available but these may be slippery.

The section across the moors can be featureless. It is important to read the instructions and check the map regularly to ensure you stay on the correct path.

This route can become very boggy; take your time to work out the best route to navigate across it.

There are a few sections on steep scree slopes; place your feet carefully. Walking poles will help a lot if you have them.

If you wish to carry a hardcopy map, we would recommend buying the Harvey Coast to Coast maps (East and West for the full route). Alternatively, you may wish to print the daily maps directly from our app.

This museum sits in the Old Literary Building. There are an interesting collection of display boards and a video which provide insight into life in this region.

This museum is an excellent resource to learn more about life in Swaledale with a focus on the lead mining industry, which over the years has contributed largely to the history, culture and way of life in the valley. Although the mines have closed, there is still much evidence of it, as you will have seen on today’s walk.

There is nowhere to buy food between Keld and Reeth, so be sure to bring enough supplies for today’s walk before leaving Keld.

Reeth is the biggest town in the Swale Valley and has a collection of pubs, cafes and restaurants.

*** To help you follow the route with confidence we have provided full written turn by turns to aid you on your walk from Keld to Reeth. Whilst, the Coast to Coast is waymarked, it can be featureless and off the beaten path at some sections so we strongly suggest that you follow the GPS tracks in the Macs Adventure smartphone app to ensure you have a safe, enjoyable and problem-free day.  The daily maps can also be printed from the web version of the app should you wish to take paper copies with you. ***

0.00km – Facing the Keld Heritage Centre TURN LEFT to pass the Keld Chapel on your right. After 60 metres TURN RIGHT onto the gravel lane following the sign for the Swale Way and the Coast to Coast Bridleway.

0.31km – As the path forks BEAR LEFT to head downhill on the brick-lined path, following the sign for Pennine Way and Swale Trail. At the bottom, BEAR LEFT to cross the wooden bridge.

0.42km – Once across the bridge BEAR LEFT onto the gravel slope heading uphill. After 80 metres, with a waterfall on your right, TURN RIGHT to proceed through a wooden gate signposted to Rampsholme.

1.40km – After passing a derelict stone building on your right, CONTINUE STRAIGHT ON as a path joins from your left. After 100 metres BEAR RIGHT as the path forks near a rusty, ruined vehicle. After 50 metres the path will fork again; this time BEAR LEFT ignoring the right path that heads downhill beside dry-wall.

1.60km – You will see Crackpot Hall ahead. BEAR LEFT to follow the path up and around Crackpot Hall on your right, walking on a rubble path, with huge mounds of stone on your left. Crackpot Hall was first a hunting lodge, and then mining offices. Perhaps surprisingly, it was lived in as recently as the 1950s!

1.80km – CONTINUE STRAIGHT ON along the well-established path passing a stone building on your left. There are great views on your right looking through the Swale Valley.

2.40km – With a waterfall just ahead on your right, BEAR RIGHT as the path forks to cross over the stream and continue towards the buildings ahead.

3.30km – Once the stone steps reach a T-junction TURN LEFT onto the gravel road.

4.10km – Shortly after crossing over a stile (steps over a fence or wall) or through the gate CONTINUE STRAIGHT ON, ignoring the gravel road that turns left to head uphill. There is a ‘C to C’ signpost to guide you.

4.70km – As the gravel road bends right, TURN LEFT to walk between two cairns (a pile of stones) on a rocky singletrack path that carves through heather. Directly on your right are grouse hunting hides. This path is easy to miss so stay alert for two cairns beside the road. The path continues steeply downhill and is on loose rock in places; bear in mind this may be slippery. Walking poles will be advantageous here. The path zig-zags downhill towards the stream.

5.60km – BEAR RIGHT to cross the bridge near the impressive building with 4 intact arched windows, and head uphill on a series of switchbacks. After 100 metres of climbing, you will reach a grassy T-junction near a cairn. TURN RIGHT to walk along the path. After 100 metres ignore a sharp left turn going uphill. This 'impressive building' was a peat store; it was so large it could store 3 years of fuel.

6.00km – BEAR LEFT as the path forks to head steeply uphill. Ignore the right fork which heads towards the stone buildings. This path continues over several mounds of small stones.

6.30km – Ignore a path turning left to head up a gully with lots of scree, and then immediately pass several boulders on your left and reach a craggy cliff directly ahead. TURN LEFT to head up on the stony path through a gully. These two-gullys run side-by-side separated by a ridge; the path we have taken and recommend is the southern gully as it is less slippery and more well-trodden. There is a myriad of paths here, so check the map regularly to ensure you stay on the correct path. Halfway up the gully, you will see a wooden post directly ahead; CONTINUE STRAIGHT ON towards it.

6.70km – From the wooden post you will see a gravel path making a sharp bend a few metres away with a cairn on the corner; BEAR RIGHT towards it and then immediately BEAR LEFT to head uphill on this gravel path which will bend left towards a big cairn.

6.80km – From the big cairn BEAR RIGHT to follow the path towards another cairn with a wooden post beside it. You are now climbing onto a lunar landscape.

6.90km – At the cairn and wooden post BEAR RIGHT to join the established gravel path with vehicle tracks. You are heading towards a piece of rusty mining machinery which you will pass on your left; this is a ‘Stone Crusher’.

8.10km – CONTINUE STRAIGHT ON along this gravel road ignoring a right turn beside a cairn that heads uphill towards a gap in the drywall.

8.70km – Once across the bridge BEAR RIGHT to pass through a gate and continue on this road.

9.20km – With huge mounds of scree on your left, BEAR RIGHT as the road forks. After 200 metres CONTINUE STRAIGHT ON ignoring the sharp right turn which crosses a bridge. This road passes some intact buildings and then the impressive Old Gang Smelt Mine with its impressive chimney still standing.

11.70km – CONTINUE STRAIGHT ON to cross the paved road and resume the path on the far side beside the wooden post. BEAR LEFT as the path forks and then BEAR RIGHT as it forks again. This path will pass the Surrender Smelt Mill on your right, and then BEAR RIGHT onto a grassy path heading up to the brow of a hill where you might see a cairn.

12.40km – CONTINUE STRAIGHT ON to head downhill towards a stream. Once across the bridge BEAR RIGHT to head uphill towards the dry-wall. The descent is on wooden steps which may be slippery when wet.

12.60km – After the climb from the bridge, proceed through the gate and CONTINUE STRAIGHT ON with the drywall on your right.

13.00km – As the dry-stone wall bends right CONTINUE STRAIGHT ON between fence posts and onto the wide rocky track. After 300 metres ignore several grassy paths which turn left.

14.10km – TURN LEFT onto the gravel road headed slightly downhill towards the farmhouse. After 200 metres, having passed the house on your right, TURN LEFT to head uphill towards another farmhouse. Ignore the right fork which becomes paved and heads downhill.

14.70km – As you pass the farmhouse on your left CONTINUE STRAIGHT ON along this well-established road for 700 metres, ignoring vehicle tracks and footpaths off to the side.

15.40km – CONTINUE STRAIGHT ON onto the vehicle tracks, ignoring the gate on your right.

15.90km – As the path bears away from the dry-wall and then make a left-hand bend, TURN RIGHT onto a vague grassy path near a small cairn. After 200 metres the path will walk closely beside a section of dry-wall on your right. BEAR RIGHT through a wooden gate onto a narrow footpath bordered by dry-wall on both sides.

16.70km - CONTINUE STRAIGHT ON to ignore gates on both sides and continue along the narrow footpath. After 300 metres ignore the gate ahead and BEAR RIGHT to remain on this footpath.

17.10km – TURN LEFT to walk on the pavement beside the paved road.

*** This is the end of our Keld to Reeth route, use your included documentation to find your overnight accommodation ***

Sturdy hiking boots, warm clothes and a waterproof/wind-break layer are all required. The weather can change quickly so be sure to take all equipment even if the weather looks okay. Walking poles will be a big advantage on some of these ascents and descents.

This walk is isolated with limited opportunities to buy food or water so be sure to bring enough with you.

Would you like to the ask the author a question? 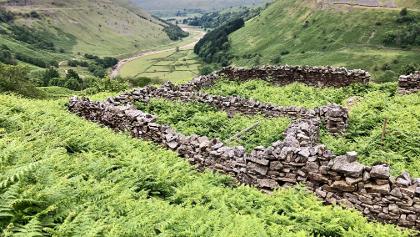 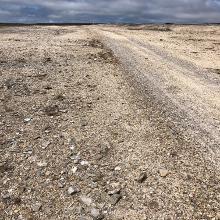 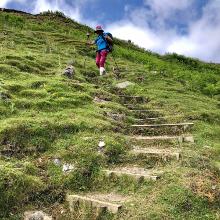 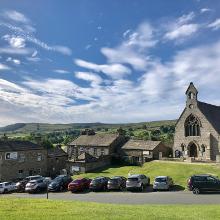