No matter how much the coastline and nearby piazzas of Amalfi may be bustling with tourists, within a few minutes of this hike you will escape the crowds and be greeting locals with your heartiest ‘Buongiorno!’. This is a glimpse into how life in Amalfi has existed for generations; an old man balances precariously atop a wooden lattice, 3 metres high, tending to his lemon trees, which droop under the weight of the grapefruit-sized, yellow treasure for which the region is famed. Derelict stone buildings – old paper mills – crumble beside a swift stream as nature steadily reclaims her territory. All this set within an amphitheatre of magnificent limestone cliff-faces.

The quiet, forgotten village of Pontone greets you halfway through the hike, its sleepy Piazza San Giovanni a peaceful spot to break for a drink or lunch. From Pontone, the colourful houses of Amalfi, far below, appear like a ribbon threaded through the valley, nestled between two mountains, and with an unbeatable backdrop of the Mediterranean, a rich sapphire-blue.

Ravello is a popular village, where tourists enjoy browsing through the vibrant ceramics shops and art galleries, stepping into history in the old monasteries and churches, or watching the world-go-by with a gelato ice cream, or a slice of pizza in the Piazza Duomo, the square around which the village is centred. From here, you can return to Amalfi by bus or continue on foot.

Sit in Piazza Duomo and feel the pace of life slowing down around you. Is it too early for a beer?

Much of the path is on rocky-steps, which can be irregularly spaced. Bear in mind these may be slippery when wet, place your feet with care, and use the handrail where one is provided.

There are remote cafes after 1.7 and 3.5 kilometres.

Pontone has a small collection of cafes and restaurants around its Piazza San Giovanni.

After 4.3 kilometres there is a water-tap where you can refill your bottles.

0.00km – Start at the bus stop in Amalfi, where departures for Scala, Ravello and Pogerola leave from. Facing the small roundabout, and with the sea behind you, CONTINUE STRAIGHT ON headed to the narrow street between the Tabacchi and a Gelateria. Ignore the main road on your left which passes through a tunnel. After 100 metres you will pass the steps to the ornate Amalfi Cathedral on your right. After 350 metres, admire the Cape E Ciucci fountain on your right, which has a nativity of carved limestone figures, and was originally constructed to quench the thirst of donkeys carrying produce from the mountain-villages.

0.82km – Immediately after passing Musea Della Carta (The Paper Museum) on your left, TURN RIGHT steeply uphill. After 40 metres, as the road passes through gates and into a school, TURN LEFT to head uphill on the steps. At both junctions you are following signs for Valley Delle Ferriere.

1.10km - CONTINUE STRAIGHT ON, ignoring several sets of steps on your right, and keeping the lemon groves on your left.

1.50km – As the path forks near a rusty metal antenna, BEAR RIGHT up a few steps. You will immediately pass a café.

1.80km – CONTINUE STRAIGHT ON keeping the stream on your left. Ignore the path bearing right and heading uphill.

2.00km – After passing a derelict stone building, you can take a detour by turning left to see a small waterfall, before returning the same way. Be careful as this path is steep and may be slippery. After passing the waterfall BEAR RIGHT to continue heading uphill on the major path, keeping the stream on your left.

2.30km – You will pass an old electricity building on your left.

2.50km – At an arched entrance to a derelict building, BEAR RIGHT to head uphill on crumbling stone steps. At the top, near an information board, TURN RIGHT following the sign to Pontone. After 200 metres, once over a narrow bridge with a wooden handrail, TURN RIGHT.

2.70km – After climbing some steps there is a T-junction; TURN RIGHT and then after 50 metres BEAR LEFT as the path forks. At both junctions, keep following the sign to Pontone.

3.30km – CONTINUE STRAIGHT ON to pass under a wooden lattice, and past a café on your left. There are breathtaking views on your right to Amalfi.

3.70km – You will pass several catholic shrines on your left. CONTINUE STRAIGHT ON ignoring paths on both sides, and follow the paved steps downhill. After 100 metres, ignore several steps on your right, and the path will soon join a narrow road.

4.10km – As the road becomes smoothly paved, and with a metal bench on your right, BEAR LEFT to head uphill on the stone steps, following the sign to ‘Centro’. After 200 metres, ignore two sets of stone steps turning sharply on your left. There is a water-tap here where you can refill your bottles.

4.50km – This path will open out into the Piazza San Giovanni. BEAR RIGHT to head under the belltower, and then immediately TURN RIGHT. After 50 metres, as the path forks BEAR LEFT, keeping to the stone slope headed downhill to the road. After 100 metres, TURN LEFT and walk along the road for 800 metres. This will pass through two tunnels bore through the rock. Walk on the left side facing the oncoming traffic.

5.20km – The road makes a sharp right bend and crosses over a bridge; immediately after crossing over the bridge, TURN LEFT. It appears a dead-end, but there is a covered alleyway under the building, After 100 metres, with a bridge on your left, BEAR RIGHT up the steep steps to join the road, then TURN LEFT to walk along the road.

5.40km – Just after passing a gap in the wall on your left, TURN RIGHT to cross the road and head up a short set of steps, following signs to Ravello. At the top, CONTINUE STRAIGHT ON to cross over the road, and begin climbing another set of steps on the far side.

5.60km – At the top of the long set of steps, TURN LEFT to walk along the road, again following signs to Ravello. After 200 metres, TURN RIGHT at the zebra (black-and-white) crossing and then continue up the steps.

6.00km – At the junction, TURN RIGHT sharply, following the sign to Ravello Via Sigilgaida. These steps will wind their way for 100 metres to join the road. TURN RIGHT to walk along the road, following signs for Centro and Piazza Duomo. You will pass the church on your left.

6.20km – BEAR LEFT as the road forks to head through the stone archway, and then after 200 metres finish in Piazza Duomo. Why not stop for a bite of lunch? 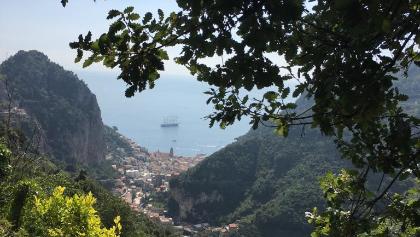